Pantoprazole is a proton pump inhibitor drug that inhibits gastric acid secretion. It works on gastric parietal cells to irreversibly inhibit (H+/K+)-ATPase function and suppress the production of gastric acid.

Pantoprazole is used to treat certain stomach and esophagus problems (such as acid reflux). It works by decreasing the amount of acid your stomach makes. This medication relieves symptoms such as heartburn, difficulty swallowing, and persistent cough.

Domperidone is a peripherally selective dopamine D2 receptor antagonist that was developed by Janssen Pharmaceutica and is used as an antiemetic, gastroprokinetic agent, and galactagogue.It may be administered orally or rectally, and is available in the form of tablets, orally disintegrating tablets (based on Zydis technology) suspension and suppositories.The drug is used to relieve nausea and vomiting to increase the transit of food through the stomach(by increasing gastrointestinal peristalsis)and to promote lactation (breast milk production) by release of prolactin. 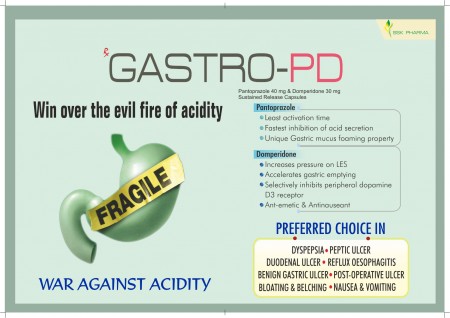